Our basic objective is to promote understanding of Sankhya (also written as Samkhya) system, which is the oldest Darshan (Philosophy), is accepted as the oldest philosophical system in the whole world. Sankhya system have provided theoretical base to many of the Indian spiritual pathways including Yoga, which is a structured and practical way of achieving spiritual truths envisaged in Samkhya.This Philosophy has influenced almost all eastern philosophical schools including Jainism and Buddhism. In recent past different forms (names) of Yoga e.g. Bhakti yoga, Karma Yoga, Hatha Yoga, Kundalini Yoga , Dhyan Yoga etc. etc. have emerged worldwide, but underlying thread of belief (Samkhya system) at the core of all these different Yoga ‘forms’ remains same. In this context a clearer understanding of the concepts prescribed in Sankhya theory therefore is of great benefits to adherents of any of the so called yogic system. Traditionally in India, Sankhya and Yoga are considered complimentary to each other and it is believed that there is no knowledge is as valid as ‘Sankhya’ and there is no action as sacred as ‘Yoga’. Often these both philosophical systems are together referred as ‘Sankhya-Yog’. The most sacred text of Hinduism ‘Bhagavadgita’ stands as a foremost testimony to the importance of ‘Samkhya’ philosophy in ancient India. The title of the most important chapter (The second chapter) of Shri Bhagavadgita, is,“Sankhya Yog” and unless this Sankhya philosophy had a widespread recognition and acceptance as a very predominant philosophy in ancient India, this chapter would have not been given this unique title.

Following statements from ancient Indian scriptures indicate the importance of ‘Sankhya-Yog’ in spirituality.

A good understanding of ‘Samkhya-yog’ theory brings a positive discrimination to our mind that enables us to differentiate ourselves as something beyond a Physical body living in this materialistic world. Once this discrimination is acquired and believed only then one can climb ladders of spiritual world. Without an understanding of Samkhya Philosophy, Yoga becomes simply a physical exercise, which is more or less the current situation in the modern world. This entire process of understanding self and achieving the discrimination of being separate from material world (nature) thus can be termed as ‘Samkhya-yog’. This knowledge brings a good insight into ‘nature’ of self and helps in finding right ways of deep meditation.

Sankhya: Truth Behind Yoga (Base of Yoga)

Sankhya system has more or less influenced all philosophical systems.

Sankhya is the truth behind Yoga and its importance can be imagined by the fact that in Bhagwatgita (holiest text of Hindus) lord Krishna says ‘There is no wisdom like Samkhya and no power like Yoga’. Due to importance of samkya in spiritual life the most important chapter of Bhagwatgita is called ‘Samkhya-yog’. As mentioned in Holi text of Gita that only the ignorant ones differentiate between Samkhya and Yoga and not the wise ones. Any person who considers the two as ‘integrated’ has the right insight. According to Svetasvatara Upanisad ‘Brahman (Ultimate reality of cosmos) is to be apprehended by ‘Samkhya-yoga’.
According to Patanjali sutra Yog is defined as ‘Chitvrittinirodha’, this Sanskrit word is comprised of three different words chit, vritti (tendency) and nirodha (overcome).These together mean ‘to overcome All tendencies of Chitta’ So the whole system of Yog basically aims to understand and control ‘Chitta’, which is a concept elaborately explained in Sankhya theory. Nature of this ‘Chitta’ can be understood and felt as a particular level of our consciousness with help of understanding of Sankhya followed by an astute practice of Asthang Yog.This term ‘Chitta’ doesn’t seem to have an equivalent word in English language but for convenience can be translated as ‘mind’. Seven out of Eight steps of Yoga are aimed at ‘Samadhi’, which according to yoga is the final desired stage and this is the stage of total ‘disillusionment’ of Purusha (soul) from prakarti (Nature). In this way steps prescribed in Yoga system together are aimed at achieving a ‘discrimination’ explained in detail in Sankhya system.
Sankhya system assumes a line between living and non-living within us and believes that seeker with a sincere dedication can perceive this ‘difference’ and attain the eternal ‘discrimination’, It has clearly warned us about possible common error of mistaking different levels of consciousness with ‘self’ in the course of inward journey of Yoga. This understanding propagated by Samkhya system is of utmost importance to seekers. The Psychological base of Yoga is explained in Sankhya only and it helps to move from abstract to concrete and vice verse. The founder of Sankhya philosophy sage Kapil is also sometimes referred as the ‘first psychologist’ in the history of mankind. 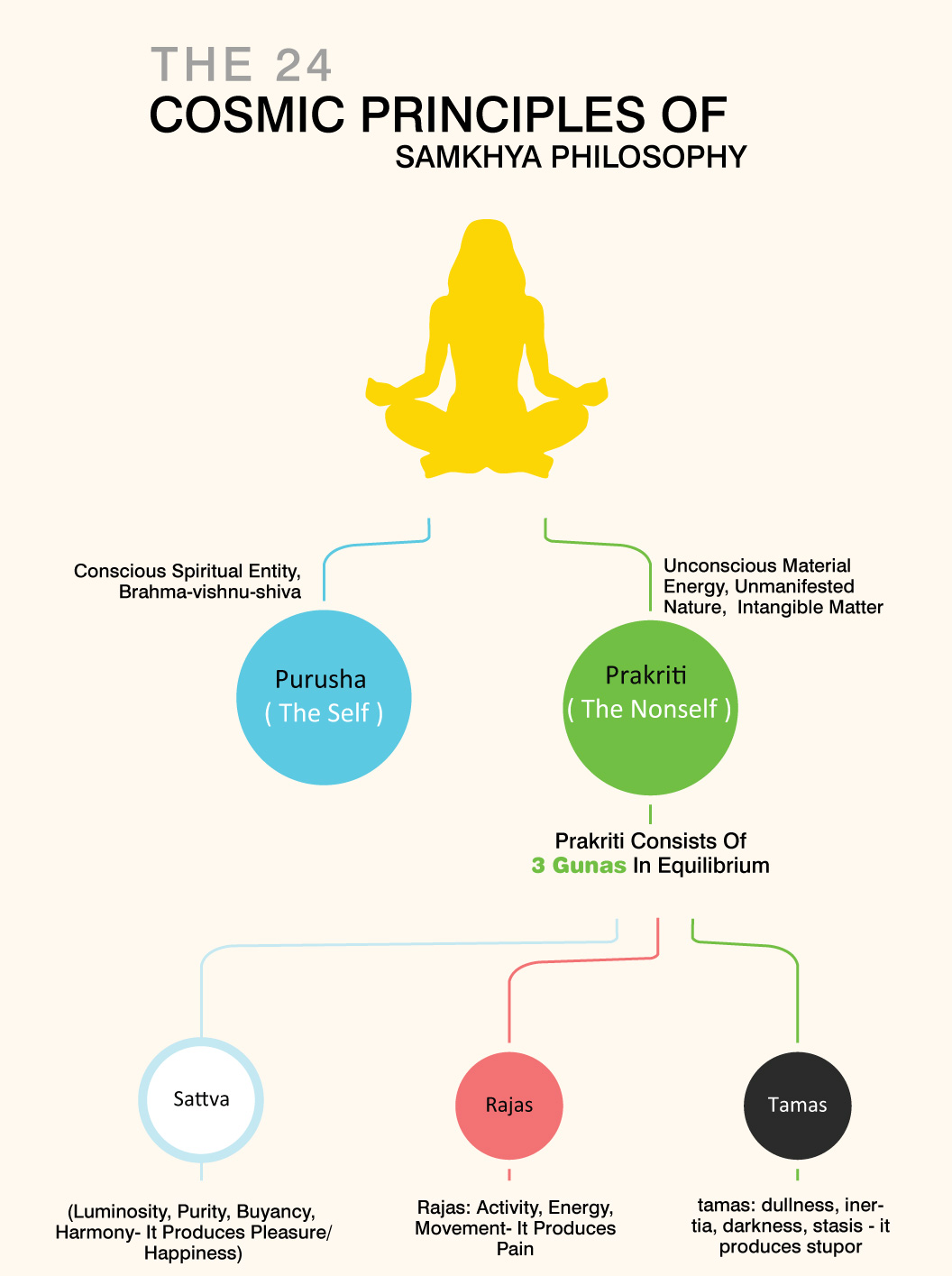 Getting in Touch With us